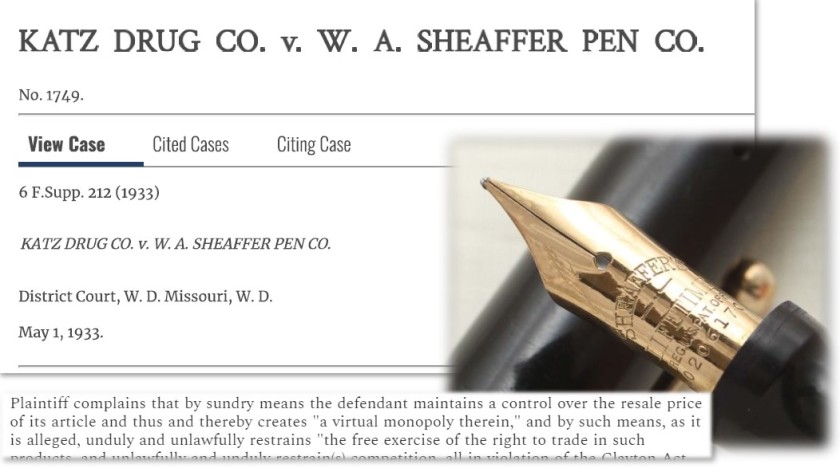 I recently wrote a post pertaining to Lifetime Guarantees associated with pens and the legal issue those guarantees wrought. Prior to the FTC legal troubles, Sheaffer found themselves engaged in a battle with a Kansas City-based drug chain called Katz. I highly recommend reading “Look What the Katz Drug In” by Daniel Kirchheimer on the topic and the mysterious and cryptic numbering sequence associated with Shaeffer’s Lifetime nibs.

Founded in 1914, by the brothers Ike and Mike Katz, they opened two drug stores in Kansas City, Missouri. Katz’s claim to fame was their “cut [rate] prices.” At the start of World War I (for the US), Katz Drug Stores became famous when they were permitted to remain open for business past 6 pm despite the wartime curfews on nonessential businesses. Committed to having the lowest prices, they ate a new 10% tax on cigarettes instead of passing the cost to customers, thus their slogan “Katz pays the tax!” As time goes by, the company is bought and sold, eventually becoming part of CVS.

Skipping the legalese, Sheaffer refused to sell their pens to Katz because Katz would not honor Sheaffer’s fixed retail price (sounds a lot like Apple don’t you think?). Behind the scenes, Katz acquires quantities of Sheaffer Lifetime Fountain Pens and begins selling them at what they term “cut price.” Sheaffer responds by serializing the Lifetime nibs. Originally stamping a serial number on the top of the nib, then later stamping the underside with the same number. Katz simply removed the serial number from the nibs, claiming the serial number violates the Sherman Antitrust act. Sheaffer filed suit on 20 December 1930, claiming their Lifetime pens had been altered, mutilated, and damaged. Katz responded that any alteration, damage, or mutilation was done in response to the unlawful practice of Sheaffer for the sole purpose of identifying the dealers and resellers from whom Katz had acquired the pens.

The legal wrangling spanned three years, attributable primarily to Sheaffer’s strategy of legal attrition against a smaller adversary. This is where Kirchheimer’s research becomes invaluable and for which I will rely heavily – why Sheaffer felt it needed to serialize the nibs used on its Lifetime pens.

Evidence to the contrary, Sheaffer had changed the guarantee from applying to the nib only to the entire pen well before the introduction of serial numbers. Maybe the serial number WAS the solution for an internal company problem. Craig Sheaffer stated the nib serialization was to ascertain the level of warranty, so why track pens’ distribution from their factory? The answer is obvious, it appears he conjured up a story to justify their actions. In short, he perjured himself.

How do we know Sheaffer was tracking the pens by their serial number, they published a list of serial numbers associated with pens reported stolen from shops. Declaring “these pens are contraband and if offered for sale by anyone other than the original purchasers should be seized and those offering them should be apprehended. If the serial numbers have been buffed off, the nibs are damaged beyond repair and have lost their Lifetime service, guarantee, and value.”

The Rest of the Story

In 1933, Sheaffer’s price-fixing is deemed illegal and Katz wins an injunction preventing Sheaffer from prosecuting its case against Katz for selling the mutilated pens. Ultimately, they agreed to let bygones be bygones and Sheaffer made Katz Drug a dealer. But not of their top-of-the-line brands, only for the penmaker’s secondary line of pens.

As pen collectors, we still do not know the logic or the use of the Lifetime serial numbers as it relates to dating pens. That secret remains buried in the company archives.

I'm a loser as my wife likes to tell me, I enjoy researching dead cousins and playing with fountain pens. View All Posts

One thought on “Katz Drug, Sheaffer Pen and Serial Numbers”

This site uses Akismet to reduce spam. Learn how your comment data is processed.